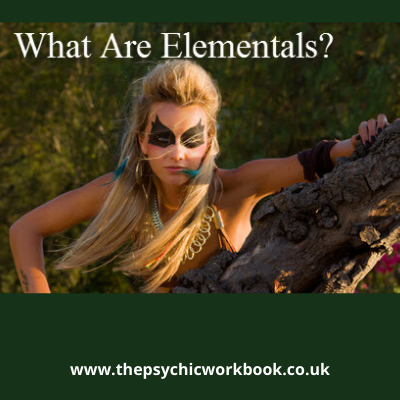 Elementals Are Considered To Be Nature Spirits

There’s a lot of mythology and folklore around the subject of elementals, often going into great detail about them. I’m not sure that amount of detail is really necessary given that we don’t REALLY know what they are or even if they actually exist!

A simple answer would be that elementals are intelligent, self-aware entities made from the essence of one the main elements of life, earth, air fire and water.

Some sources consider them to be of a completely different ‘race’ to humans. They may belong to the angelic realms; they aren’t of the physical world, nor are they the spirit of someone who has passed from it. As Diane and I wrote in our Advanced Workbook For Spiritual & Psychic Development the angelic hierachy is said to exist at a more advanced level of consciousness, beyond the spirit world and consists of Elementals, Devas, Angels and Archangels, each with advancing consciousness.

Elementals are invoked for magical purposes and protection rituals and are most traditionally one of the following:

There are also nature spirits called nymphs, often classed in the same category as elementals

But these are actually considered to be slightly different. While elementals are the essence of an element, a nymph is the spirit of something. Examples of nymphs are dryads, and naiads.

Dryads are tree spirits, each tree has its own spirit, or each dryad has its own tree to care for.

Naiads are spirits of freshwater.

Often Depicted As Mischeivous, Elementals May Need Someone To Watch Over Them

Existing above the elementals and nymphs, at a higher evolved consciousness are devas. While a dryad would be considered the spirit of a tree, its deva would be the guardian of the entire forest – almost like a team leader. Other devas protect sacred sites, mountain ranges, shrines, and places with magical or mystical qualities.

While some people claim to be able to see elementals, I do wonder, if it is simply a way for us to translate the energy, or life essence that runs through nature when we are aware of it. Or a way for the power of nature to make itself known to us. As humans we can’t always put into words what we feel, so we need a way to make sense of it all, and in ancient times, stories were the way that this was done. Stories used to describe nature’s essence may have become mythology over time and now that is how some expect to see the energy, so they do. Just a thought.

Or maybe elementals do exist and are hiding out in our very gardens, ponds, forests and streams.