Premonitions, Self -Fulfilling Prophecies & The Law Of Attraction 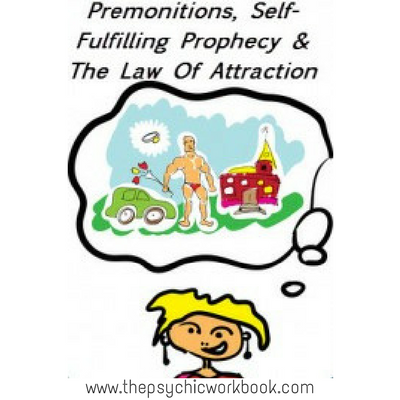 What’s The Difference Between A Premonition And A Self -Fulfilling Prophecy?

You know when you start thinking about things and you go round in circles and wish you’d never started? Yeah, that’s what the subject of premonitions and the like can do to you.

When it comes to spiritual philosophies like these, much like when you consider the concept of time travel, there’s a whole world of apparent contradiction, confusion and chicken & egg scenarios that can lead to one hell of a headache when we try to rationalise them.

Here’s the thing, no one really knows. We’re all making this up as we go along. Granted I’m making up my beliefs on the back of a lifetime of experience, research, personal development and philosophising. But even so. No one has the definitive answers to this stuff. So here are my (simplified) thoughts. Allow them to guide you to yours, whether you agree with me or not….

The Law Of Attraction states that what we focus on we receive.

It’s similar to a self-fulfilling prophecy where we tell ourselves over and over again that we are a certain way: lucky, unlucky, clumsy, wealthy, happy, miserable etc. And lo and behold, we are that way.

Is a premonition different to a self-fulfilling prophecy?

Or is it something that’s going to happen anyway?

What’s the difference and how can we tell them apart?

One day I had a premonition about an event. It kept coming back to me over a few years. And eventually it came to pass. Now, my question to myself was, did the initial premonition occur through fear, or even wondering what my future might be like. Was my mind making stuff up, as it has a tendency to do? Did I then focus on it, which, given what the law of attraction states – we attract what we focus on – caused it to come into being? Or was it going to happen anyway?

The answer is that I don’t really know.

Yes, I’ve Had Premonitions That Have Come True

I have had premonitions on many occasions, about all sorts of things, a person’s illness, death, a child being conceived, the gender of friends’ children before they were born, accidents, celebrations and more. Usually they’re fleeting glimpses that have simply popped into my head. I haven’t asked for them, I haven’t been thinking about the person concerned. I just know, feel or see them in my mind’s eye.

I’ve also manifested things that I’ve wanted in my life by focussing on them. A manifestation or self-fulfilling prophecy is one that comes about through your thoughts creating your reality. Combine this with repeated actions, beliefs and habits that are aligned with achieving that outcome, and voila!

In my opinion there’s also a crossover possibility. A lot of times a premonition is only the possibility of an event occurring. It’s not ALWAYS set in stone. So when you have or are told a premonition about yourself, you can then bring it into being by your thoughts, actions and beliefs. This can be a good thing and a bad thing. (Especially if it’s not a positive end result.)

I noticed this specifically when I used to do Tarot card readings. I would often see two potential outcomes for the person I was reading for. Their current course of action would take them one way, but altering it would mean they had a second, optional route to take.

Think about it in practical terms. If a person is overweight and goes to the doctor. Their doctor may predict their future to be filled with health issues, continued weight gain, lack of mobility, joint problems, possibly diabetes, and circulatory problems. BUT they have a choice. If they make a few lifestyle changes they have a completely different potential future. It’s up to them, it’s not set in stone.

If that same person continually tells themselves, they are worthless, fat, overweight, can’t exercise etc. What do you think will happen to them…. They will become their own self-fulfilling proposition!

I think I also believe that there are some events that are set in stone and will come to pass.

Admittedly, it can be hard, perhaps impossible to differentiate between a certain premonition, a potential premonition and a vision of something that we could attract into our lives. But I don’t think you necessarily need to be able to tell them apart.

If you have a premonition that something will turn out a particular way and you didn’t want to happen like that, go ahead and make changes. Fight it, find an alternative outcome to work towards and do everything in your power to achieve it. As a said, it may just be a possibility, in my opinion, a premonition can be altered.

And, if it’s going to happen anyway you will probably be better prepared for it this way too. I would never just resign myself to it, I would always prepare for it, then focus on and plan for a different outcome.

Saying all of that, when I’ve had premonitions I could do nothing about I’ve always had a sense of calm with it, of knowing that this was the way it was mean to be. Even on the tough stuff I just knew it was going to happen and I just had to prepare for it.

Plan for the best, prepare for the worst!

If I’m honest, I think that most of the ‘set in stone’ premonitions are major events and incidents. If it reassures you, I have even seen the premonition of a terminal illness turned around, with sufficient healing. Most of the rest, well I reckon we have some control over, so it doesn’t really matter whether it’s a self-fulfilling prophecy or a premonition because you can work with it, or against it either way.