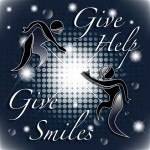 Is karma the same as fate? Is it destiny? Is it a feeling of justice having been done? Do all acts attract ‘karma’? These are some of the questions I have been asked and that have come up during discussions with others. So I thought I’d delve into the world of karma and see if I could help you to understand a bit about what it is. Then you can  decide for yourself how it might fit into to your view of the world.

I thought I knew my beliefs surrounding karma, but I decided I’d do a bit of research before writing this. I discovered that there are many aspects, definitions and beliefs about karma. Some of them really challenged my perceptions and made me re-assess my own thoughts.

I’m going to try and simplify the concepts of ‘karma’ here for you.

For the most part the word ‘karma’ is associated with Indian belief systems. In Hinduism, Sikhism and Buddhism karma means ‘acts’ or ‘deeds’. The idea is that your acts or deeds accumulate a kind of score which determine how you will experience your next life (incarnation). It isn’t necessarily a blow for blow exchange, you can negate a ‘bad’ score by subsequent kind acts. So at the end of this life your karmic score is in credit, or in debt and your next life will reflect this.

Then I read a slightly different description of karma, taken from the beliefs and teachings of the Indian faith of Jainism. In this religion karma is referred to as very subtle and microscopic particles (pudgala) that pervade the entire universe. These particles are attracted to the karmic field of a person due to vibrations created by their thoughts, words and deeds. When the karmas interact with the person’s consciousness it creates their life as they know it. Does this mean it’s more instant and can affect this life as well as subsequent ones?

Karma and Freedom From The Cycle Reincarnation

It appears you need to repay any karmic debt before you can attain freedom from the cycle of reincarnation. Or you can attain freedom through self-realisation and connection with the divine source. (An understanding, I suppose, of interconnectedness as well as an ability to disassociate with materialism.) In some cultures however, there is also a belief that some acts can bring you closer to the divine source, or nirvana. These acts will, by their pure nature allow you to exit the continual cycle of reincarnation (samsara).

Is this belief system very different to other beliefs in more western cultures? We reap what we sow, ‘do unto others as you would have done to you’ referred to in the Christian faith. In paganism, there is the threefold law, that what you give out will return to you threefold.

Is karma and its relatives simply a built-in mechanism in all cultures to attempt to control the behaviour of its people?

All of these beliefs do help to create an inner moral compass. The idea of ‘Karma’ may help a person to cope when they or people they love are hurt. Or when others act in a way that they see as ‘bad’. But do you need an instant result? Can you accept that the comeback on individuals may take time and you may never be witness to it? Are you able to see and understand that there is a bigger picture? Or is karma just a way that helps us to let go and hope, or trust that justice will be done because otherwise life might seem so unfair?

I find this subject and the thoughts and debate it brings up absolutely fascinating. There’s so much more to it than I could write here. In conclusion, I’d like to think that we don’t need these threats of punishment and retribution, in this or any other lifetime, in order to be nice to others. Can we not simply act in a kind and loving way without doing so for the rewards it will bring, or because we fear the repercussions of doing otherwise?

Is happiness and contentment not reward enough?

P.S. Just be nice to each other, if you get good karma, it’s a bonus!