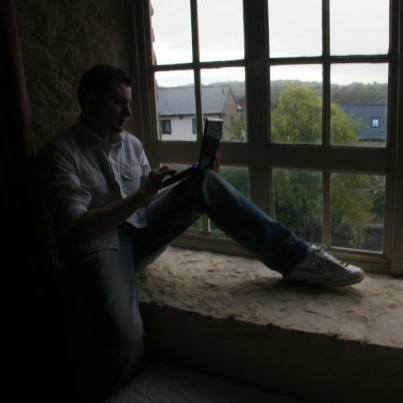 Looking For Proof Of The Paranormal?

It might sound odd, but I always quite fancied being a paranormal investigator when I was a kid. I later discovered that my grandad was involved with recording at haunted locations in Ireland decades ago. While I’m a definite believer in the afterlife, I also love the science behind the paranormal. Ashley Knibb and his team worked with my previous psychic development circle on an overnight investigation and very kindly agreed to be interviewed and share some of his investigative info with me – and you.

How would you introduce yourself?
My name is Ashley Knibb and I class myself as a Paranormal Explorer, Investigator & Researcher. This is primarily because I started out as just a researcher of the paranormal, bit of a book worm and seeker of interesting stuff. However that’s never been fixed on ghosts and spirits, it’s expanded into the world of science and so much more. Following one eventful overnight paranormal event, I became hooked on the overnight investigation and got a rush from investigating known haunted locations. More recently my research side and investigation side I suppose have combined to bring me to the advent of experimentation. This became more apparent as I began to focus on seance room type phenomena and mediumship. Psychical research like that of the founders of the SPR. (Society for Psychical Research)

How long have you been investigating the paranormal?

I’ve been officially conducting overnight investigations since 2006, but realistically I have been looking into various aspects of the paranormal from my school days. I just didn’t speak so much of it back then, as being a geek at school was enough lol!

What made you start ghost hunting?

Many have a definitive event or experience that drove them into wanting to know more about the paranormal. However, I would like to thank my parents for bringing me up in a way that had me question the world around me and seek more beyond the normality we all accept. I’m not sure whether they even realise they were influencing me like they did, but perhaps they do nowadays. I believe although can’t prove in any way at all, that the first paranormal activity I experienced was situated in the Guest House we lived in whilst in Wales. It was an old family house, it had several rooms and was quite a spooky place in the dark. This was the place that even at such a young age, my Dad showed me to look at things from a balanced approach, not judging, but equally not jumping to conclusions either way.

Do you work on your own or with a team?

I am happy to work alone or as a part of a team. In fact, these days many public locations come at a cost and you don’t have a choice, but to gather a team to cover the costs. Which is great really for me because I’ve been fortunate to work with many great teams and investigators through the years. I’ve experienced many different approaches and seen results in different ways, showing the variables involved in this great field. I would like to see more teams share investigations, get along, work together, learn from each other, great ideas come along when you least expect it and in my experience, there are some amazing people out there in the paranormal field which I would like to bring together more often. One great place for this is Paracon UK, which I attended last year in Derby and it felt great to spend the weekend talking with so many like-minded people.

Do you work with mediums as part of your paranormal investigations?

Yes. I know there’s been a bit of search for ‘evidence’ more recently through science and debunking, along the way it appears that some have fallen out with mediums, but I think this is wrong. I think mediums and sensitives bring so much to the field that it’s important to involve them just as much as you would carry a MEL Meter. The fundamental thing here is that we are capable of sensing stuff, we all can be mediums. Although some are lucky enough to be more developed than others we shouldn’t rule out that chance any one of us may pick up on that piece of important information. My current piece of research The Cosmopathic Project is in fact based on the Scole Experiment (www.thescoleexperiment.com) and utilising mediums is a fundamental aspect of helping with our experiments to create physical phenomena and good communication.

What equipment do you use during a paranormal investigation?
A LOT! I’ve used and often do use a varied amount of tech, low and high. However, it’s important to recognise the requirements of the investigation itself, also during public location investigations, there may be restrictions involved.

Kit-wise though, there’s CCTV, which include HD quality, audio and even pan and tilt cameras. MEL Meter (mine measures Electromagnetic Field and Temperature). Varied audio recorders including some very good quality ones. A Data Logger prototype purpose-built by the RSVP UK team, digital cameras, handheld camcorders, TV quality cameras. And much more.

How many paranormal investigations have you done?

Quite a few now lol! At one point when I was writing for Ghost Voices magazine, I was doing at least eight a year. I would love to do more, but family comes first and financials of booking places also plays a part.
Currently, we are running the Cosmopathic Project which has us at the same location once a fortnight but only for about four hours.

Have you ever experienced a full manifestation of a spirit?
I’ve seen the head and shoulders of an apparition through a door at Kelvedon a Hatch Bunker. Ironically I spent ten minutes trying to debunk what I saw before realising I should have chased it.

Have you actually recorded evidence of the paranormal with your ghost hunting equipment?
Yes. I have a video of a moving object and a recording of EVP (electronic voice phenomenon) of a clear voice.

Where is the most haunted location you have investigated?
That’s a tough one because it can depend on where and when you. Probably Peterborough Museum or the Explosions Museum, but that could change with the next investigation. I’m also excluding locations where I’ve experienced high levels of mediumship, like Bradwell Abbey where we’ve conducted mediumship experiments and the extremely active Royal Oak pub in Swanage. Simply because we, in my opinion, add to the energy in order to establish communication. Those are the top of the charts though.

What has been your most bizarre or memorable paranormal experience?

The first time I experienced Trance Mediumship at the Royal Oak. Perhaps simply because I had spent time with Mo prior and understood him and there wasn’t anything but a truly nice genuine guy there. When Mo went into Trance back then he would laugh quite dramatically which certainly made you jump lol! Pretty amazing too.

Are you a medium / sensitive to paranormal activity yourself?
I wouldn’t say I’m a medium, no. However, as I’ve mentioned before I believe that ‘gift’ is in us all for sure. I’ve certainly had the odd moment when I’ve picked up on something, which occurs more during seance room type scenarios and when accompanied by a group of sensitives.

What are you planning for future events?
As I mentioned my main project is the Cosmopathic Project, where we are utilising the Scole Experiment from the 90’s to look at experimenting with energy in order to create physical phenomena and good communication. Which is going well so far although it’s the early days of a long project.

(Physical phenomena include the movement and levitation of objects, objects manifesting in the room (apports) and in the old days’, ectoplasm)
I’m also working on the Journal of the Metetherial Project which should help to share experiments, investigation reports and theories within the paranormal community for free and in a format which means you don’t have to be an academic to understand it.

What’s your website and how can we follow your work?
All of the information about my projects can be found at www.ashleyknibb.com where all my updates are posted.