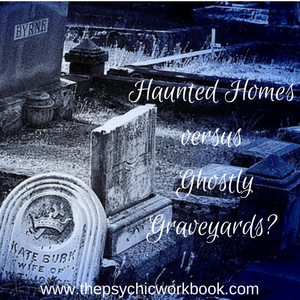 Whether You’ve Experienced A Haunted Home or Not, You Love A Good Ghost Story Don’t You?

Visiting haunted houses, telling tales round the campfire, sharing spooky experiences, the passing-on of urban myths. We all seem to like a good scare  now and again. (Some may be looking for help about their own haunted home concerns.) Or is it that we’re fascinated by this unknown quantity?

I recently saw an online article listing the top ten most haunted locations that a team of investigators had visited. I was really surprised at the cemeteries that were included. You may well be thinking that’s no surprise, graveyards and cemeteries are spooky places. But I don’t find that.

It got me thinking and I had a quick scout around various websites and listings. The usual suspects cropped up as haunted locations, that to be honest I am not at all surprised by. Haunted hotels, theatres, airfields (particularly in the U.K.), large family homes and castles all made numerous appearances. But in the U.S. particularly, with a few in the U.K. haunted cemeteries and graveyards appeared far more frequently than I imagined would be the case. Why? Why do they crop up so much, and why am I surprised?

Why Am I Surprised That There Seem To Be So Many Haunted Cemetries?

Firstly, I’m surprised because personally I have rarely seen, sensed or otherwise experienced much paranormal activity in graveyards. I can’t say it’s never happened, from memory, a monk on the Isle of Wight was the first spirit I saw in a graveyard. But I found out that there used to be a monastry next to the church many years previously so it made sense that the monk was hanging around because this area had been his home, rather than for any other reason.

Secondly, what would be the point of hanging around a cemetery? It wouldn’t have been the place you spent most of your time when alive, in most cases at least. It’s unlikely to have been the place of your untimely demise for which you seek vengence, although it’s possible I suppose. And it’s highly unlikely that your being there would have any impact on those you love and have left behind, unless they regularly visit your grave and you wish to make youself known to them. Their home would be a far better place to make that connection.

Is The Perception Of a Graveyard As  A Place Likely To Be Haunted Cause Us To Create The Problem?

My theory is that in most, but I’m sure not all cases, it is expected that a cemetery shoud be haunted, so it becomes so. How? Can that happen? I can hear you ask. Yes, it can. People tend to fear death, they fear the unknown and they seem to project that fear on to the that symbolise these things. Additionally, people express extreme emotions at gravesides and funerals and this combination can be potent. An essence of such fear and emotion around these final resting places can create an environment which some may pick up on as spooky.

It’s just a theory. To be honest, I can’t say that I’ve spent a night in a graveyard. If I had, maybe I’d have a different theory.

And why is it more acceptable for theatres, hotels and stately homes to be recognised as haunted? Well, that’s for another time.

P.S. I guess what I’m trying to say is that sometimes ‘haunted’ can be a state of mind rather than a real occurrence.