Can Ghosts Hurt You? Five Facts About Ghostly Phenomenon 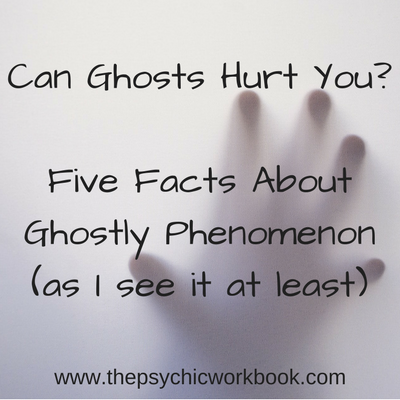 When asked, ‘Can Ghosts Hurt You?’, my stock answer is always, no. Why? For two reasons; they have no power here as it isn’t their world. And, in my opinion, most do not wish to harm us anyway. However, when I got thinking about it, I realised that it’s not entirely true. Don’t freak out now, let me explain.

The first thing to consider is what we mean by ‘hurt’. Typically we would consider that to be physical injury, and I would definitely say that 99% of the time a ghost cannot hurt a human directly, they cannot inflict a physical injury themselves.

Here are five facts about ghostly phenomena (according to me) based on my experiences and those whom I trust. I hope they can help answer this question in your own mind.

1. Firstly, I believe that the most common form of ‘ghost’ is a residual haunting, a recording in time if you like. It is where a repeated, significant or traumatic incident in history is etched into the fabric of time and space. These incidents play out (particularly on anniversaries, but not always) in the same way they did originally. There is, therefore, no interaction with others who witness it As a result, there is no way that these ‘ghosts’ can physically hurt you.

If you’re thinking ‘what, there’s more than one type of ghost?’ Take a look at my post about different types of ghosts.

2. The second most common paranormal occurrence is a visitation of a loved one from spirit. They are usually checking in, letting you, their relative, know they are safe and well on the other side and looking out for the little ones in the family. There is no reason why anyone would get hurt by these type of ghostly visitors. Even those relatives who were not particularly pleasant when they were alive typically come back to apologise and let their loved ones know that they can now see the error of their ways.

3. I know someone reading this is thinking about the statement I made earlier – ‘they’ have no power here, it isn’t their world’ – and they’re thinking,

‘What about poltergeists? Those Type Of Ghosts Can Hurt You!

Yes, from time to time poltergeist activity can cause items to move, and fly around. However, this is exceptionally rare. This activity isn’t caused by the power that the spirit has. It is caused by the power that the spirit harnesses from those around it, particularly from fear. We allow it to have our fear and it can manifest movement in objects. In these incidents, the objects may indeed inflict injury on humans, although I would always question whether that was the intention of the noisy spirit, or simply the outcome of their frustration.

A secondary consideration is that not all harm is physical.

Fear can be as harmful, whether from something real or a perceived fear. Humans can inflict harm on others using fear and intimidation and we can scare ourselves deliberatly by watching a film.

4. So my next point is that when it comes to ghostly activity I believe that the fear comes mostly from ourselves. From our lack of understanding, from our own imagination and from a feeling of being out of control. I don’t believe this is something that the spirit intends to cause (in the vast majority of cases) but maybe that’s a matter for debate.

5. When you consider that a lot of people are intrigued by ghostly goings-on, they most often go into a situation thinking it’s exciting, if a bit scary, (but that’s often the point right?) Very often when they actually experience something they cannot explain, their excitement very quickly turns to fear and their imagination takes over. They are no longer behaving rationally. They can become scared, emotionally vulnerable and very often accident prone as well. In circumstances such as a ghost hunt with the inexperienced, an injury may occur from an accident, and the fear may leave mental scars such as bad dreams or a residual jumpiness. So, was this caused by a ghost? Of course not, but it may be claimed as such.

So, What’s The Answer – Can Ghosts Hurt You?

I’ve decided that I’m sticking to my usual answer. In 99.9% of cases (never say never right?) ghosts cannot harm you. You can bring harm to yourself and other (living) people around you as a result of ghost-hunting, dabbling, or whatever you would like to call it but that is different

I hope its given you something to think about!

P.S. Seeing a ghost is rare, poltergeist activity is even rarer, please don’t have nightmares.