Are There Cheaper Alternatives To Boji Stones™? 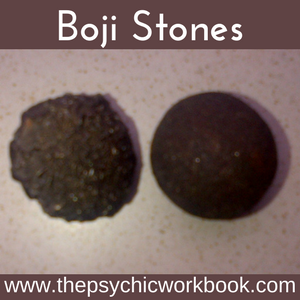 In my other blog about Boji Stones™ you can find out about their effects on the aura. They are definitely in my top ten favourite crystals. But I was amazed at the amount of interest there was in these, quite frankly, boring looking stones. Every day people are searching for information about them online and, it seems from feedback, wanting to purchase them. In the past I would never have bought them online. This was because my first experience of my own pair of Boji Stones™ was so powerful that I assumed they had chosen me (as crystals seem to have a way of doing) and I believed that not all pairs were created equal.

However, I have since done some research and, quite literally, got my hands dirty and I have to say that I have changed my mind.

(People are often looking for a cheaper alternative too, as they’re one of the more expensive crystals to buy.)

During a visit to a crystal wholesalers one of the guys very kindly helped me out. He provided me with lots of information, and more importantly all his stock of various Boji Stones™ and similar rocks to sit and commune with.

Initially I had some questions:

And what did I find out?

1. Boji Stones™ are concretions of either pyrite and marcasite or sometimes jarosite. They are found in a specific part of the U.S.A. They range in size from a few millimetres to as much as 70cm across and 12cm thick. Boji Stone™ is a trademarked name for Pop Rocks (the same stone but from a different location). They come with a yellow certificate to confirm their origins.

(“Ah, so there are other stones, not trademarked and it turns out, cheaper as a result! Okay”, I thought.)

I’ll come back to number 2 in a moment.

3. Shaman stones (also known as Moqui Marbles or Thunderballs) are hollow iron oxide spheres surrounding a pink sandy core. They are used by the Hopi tribes as part of their traditional spiritual rituals. The wholesaler had some but a quick look told me what I needed to know.

“They are nothing like Boji Stones™. I’m sure I’ll come back to them another time, but on this occasion I was on a Boji Stone™ mission.”

So, to question 2 & 4 – this is where I got my hands dirty. I had the wholesalers entire stock of Boji Stones™ and a huge tray containing all of their Pop Rocks all to myself. I was able to handle them and feel their energies and the effects they had on my aura. Interestingly the Pop Rocks, which in this instance were much larger than the Boji Stones™, had exactly the same energy. Plus the PopRock and the Boji Stones™ all had consistent energy in every single pair that I worked with.

When It Comes To Boji Stones Size Doesn’t Matter

The small ones are actually nicer to handle, in my opinion, and easy to pop in your pockets (put one on your left side and one on your right for all day energy and aura charging).

The Pop Rocks, for me, were slightly less user friendly, they were larger (more expensive to transport and post) and dirtier (leaving my hands grubby and smelling of rust).

So, In Conclusion, And After Much Research It’s Boji Stones™ All The Way For Me!